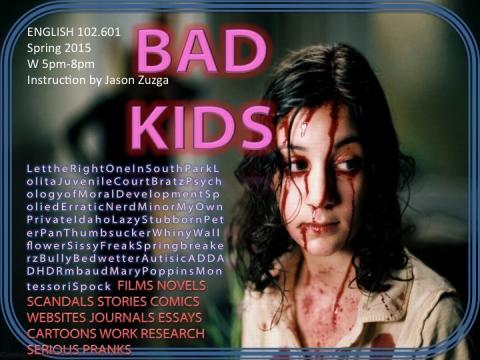 Study of a Theme: Bad Kids

Are minors presumed guilty, presumed spoiled, presumed ready to rumble, already-sexualized, unpredictable, violent, lazy, and resistant to potty training? What could be worse than a screaming baby who refuses all attempts at soothing? This class will provide a rich immersion in the literature of child psychology, as well as take on the entire spectrum of bad kids, from those who refuse to stop sucking thumbs to those who use automatic weapons to kill fellow schoolmates, to those who leap into sexual roles before their turn.  That's quite a spectrum, admittedly. The basic premise of this class, however, is to consider the cultural presentation of this spectrum in recent films, novels, documentaries, and news coverage as something of a piece, and to turn the tables on the adult world to see what is so terrifying about childhood.  We will read excerpts from several histories of the concept of childhood itself, as well as among the scholarly work of Anna Freud's Normality and Pathology in Childhood: Assessments of Development , Benjamin Spock's Baby and Childcare, Margaret Mead's Coming of Age in Samoa , Adam Phillips, Erik Erikson's Childhood and Society, and Maria Montessori's The Discovery of  in the context of films such as 500 Blows, Lolita, Elephant, Kids, We Need to Talk About Kevin, Bully, My Own Private Idaho, Where the Wild Things Are, South Park, the BBC shows In the Flesh and Skins along with selections from the literary/film works Battle Royale, Les Enfants Terrible, The Story of the Eye, Harold and the Purple Crayon, A High Wind in Jamaica, Beloved, Bastard Out of Carolina,  Peter Pan, The Exorcist, In Youth Is Pleasure, and Mary Poppins. Should Edmund be punished for asking for more Turkish Delight?  Above all, this course will ask each student what is gained, and what is lost, when a child learns right from wrong. Students will keep a journal of recollected misbehavior, orchestrate a prank, and write a disciplined, good, well-structured, carefully considered and very adult  research paper.   All works will be subtitled or in English translation.