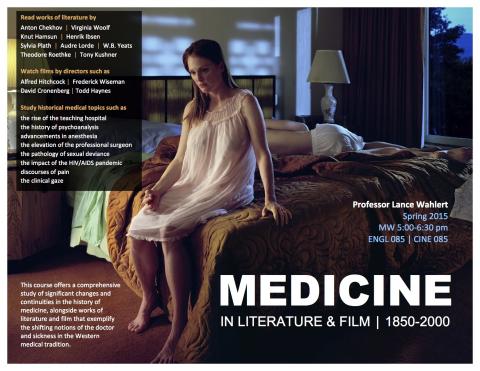 What was it like to live with a serious illness in the late-19th- and early-20th centuries? How have laypersons’ cultural understandings of sickness and health changed over time? And how do historical images, literary accounts, and cinematic representations of doctors, nurses, and sick people reveal and affect conventional assumptions about disease and medical authority? This course offers a comprehensive study of significant changes and continuities in the history of 19th- and 20th-century medicine, alongside works of literature and film that exemplify the shifting notions of the doctor and sickness in the Western medical tradition. In particular, we will focus on fictional and non-fictional texts that explore the emotional and somatic aspects of “conditions” such as hysteria, cancer, syphilis, homosexuality, and madness. As a trans-historical study of Western medicine from the innovations of Paris Medicine through the present, we will be concerned with the power of literary and cinematic narratives to bring coherence and meaning to lives at moments of great physical and emotional crisis. Inspired by recent historiographical trends to study the history of medicine from the bottom up, this course moves away from a methodology that emphasizes the “great men of science” to one that centers on the concerns of sick persons. This semester, we will read works of literature by authors such as Anton Chekhov, Emily Dickinson, Henrik Ibsen, Knut Hamsun, and Sylvia Plath. Additionally, we will watch numerous films including Alfred Hitchcock’s Marnie, Derek Jarman’s Blue, Todd Haynes’s Safe and Superstar, and documentarian Frederick Wiseman’s Titicut Follies and Hospital. In conjunction with these literary and cinematic texts, we will study contemporaneous medical topics, such as the history of psychoanalysis, advancements in anesthesia, the elevation of the professional surgeon, the pathology of sexual deviances, the impact of the AIDS/HIV pandemic, and the clinical gaze.