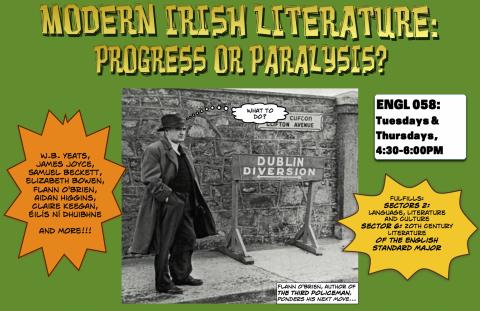 The "lazy Irish” has long been a negative stereotype, but according to literary critics such as Gregory Dobbins and Declan Kiberd, idleness became a theme that Irish authors celebrated as a way of dissenting from British nationalism. In response to the British imperial emphasis on productivity, efficiency and advancement, Irish literature developed a counter-archive of stories of delay and procrastination, perhaps epitomized by Flann O’Brien’s comic masterpiece The Third Policeman, a surreal novel of infinite regress that has since been absorbed by pop culture (for instance, the novel was aptly alluded to in the television series Lost). This course will introduce students to the modern period of Irish letters through the themes of industry and indolence. We will approach the Irish literature of deferral as a political reaction to modernization, nationalism, revivalism, and colonialism. Authors may include: W.B. Yeats, Samuel Beckett, James Joyce, Elizabeth Bowen, Aidan Higgins, Claire Keegan, Éilís Ní Dhuibhne. Assignments will include discussion posts, a final paper and contribution to a collaborative digital timeline documenting the alternately progressive—and paralyzed—modern Irish period