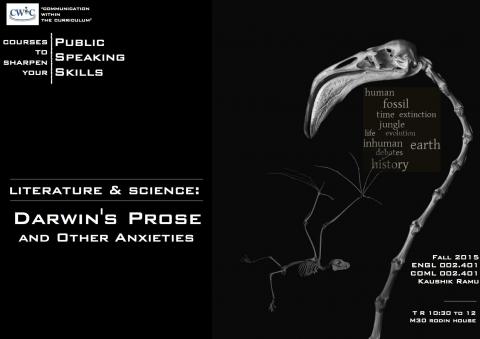 Literature and Science: Darwin's Prose and Other Anxieties

Some claim Darwin’s theory of evolution is outrageous; others that it’s among the greatest ideas in
scientific history. What anxieties are its controversies charged with? What strategies of rhetoric
does Darwin’s prose deploy? What changes if we read it as literary fiction? We will explore such
questions by studying Darwin’s The Origin of Species (1859) in the context of nineteenth-century
British imperialism, and trace its possible resonances with later texts on the human-inhuman
threshold, such as Joseph Conrad’s Heart of Darkness (1899), D.H Lawrence’s The Plumed
Serpent (1926), Edward Wilson’s The Diversity of Life (1992) and Mahashweta Devi’s ‘Pterodactyl,
Puran Sahay and Pirtha’ (1995). We will review debates on evolution’s tensions with religious beliefs,
note the theory’s feeding of fascist and racist dogma – but also admire, hopefully, its illumination of
the natural world in the depths of time. Around these materials, in an inclusive workshop-setting,
we will fashion our own acts of critical thinking, speaking, listening, interpretation and conversation.

Fulfills  Communication within the Curriculum.