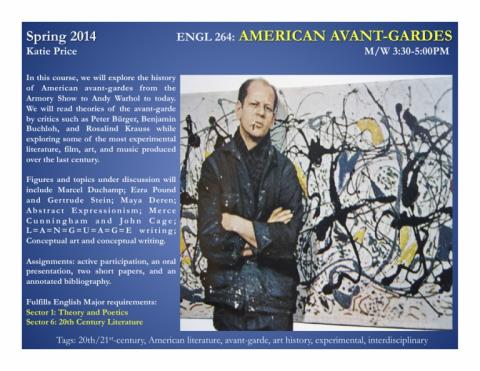 One hundred years ago in New York City, the Armory Show—which showcased over 1,000 pieces of contemporary art—marked the beginning of avant-garde experimentation in the U.S. “Avant-garde” is a military term referring to those who enter battle at the vanguard, those who fight on the front lines. In the arts, the term refers to artists who work at the cutting edge, often casting off notions of tradition and influence in order to thrust themselves into the future. In this course, we will explore the history of American avant-gardes from the Armory Show to Andy Warhol to today. We will read theories of the avant-garde by critics such as Peter Bürger, Benjamin Buchloh, and Rosalind Krauss while exploring some of the most experimental literature, film, art, and music produced over the last century. Figures and topics under discussion will include Marcel Duchamp; Ezra Pound and Gertrude Stein; Maya Deren; Abstract Expressionism; Merce Cunningham and John Cage; L=A=N=G=U=A=G=E Poetry; conceptual art and conceptual writing.  Course requirements will include active participation, an oral presentation, two short papers, and an annotated bibliography (in lieu of a final paper).