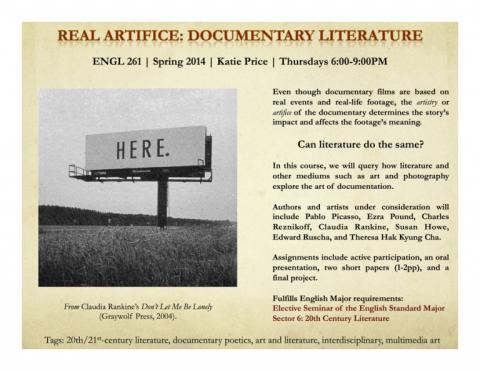 Documentary films show us the dramatic effects of storytelling. Even though
they are based on real events and real-life footage, the artistry or
artifice of the documentary determines the story’s impact and affects the
footage’s meaning. Can literature do the same? In this course, we will
query how literature and other mediums, such as art and photography,
explore the art of documentation. From Pablo Picasso’s newspaper collages
to Charles Reznikoff’s Testimony, a presentation of legal documents as
poetry, to Edward Ruscha’s Royal Road Test, a photographic documentation of
the destruction of a typewriter, the 20th century has had a unique interest
in how the real can inhabit art. Examining these and similar works, we will
consider: How do writers incorporate documents into their works? Can these
works be considered literature, or would it be more appropriate to call
them art? How does the presentation of a fact impact its meaning? Authors
and artists under consideration will include Pablo Picasso, Ezra Pound,
Charles Reznikoff, Claudia Rankine, Susan Howe, Edward Ruscha, and Theresa
Hak Kyung Cha.