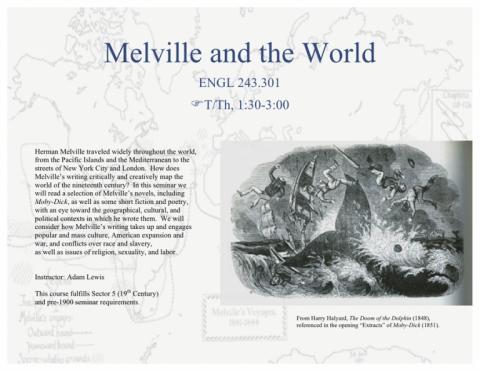 Melville and the World

Herman Melville traveled widely throughout the world, from the Pacific Islands and the Mediterranean to the streets of New York City and London.  How does Melville’s writing critically and creatively map the world of the nineteenth century?  In this seminar we will read a selection of Melville’s novels, including Moby-Dick, as well as some short fiction and poetry, with an eye toward the geographical, cultural, and political contexts in which he wrote them.  We will consider how Melville’s writing takes up and engages popular and mass culture, American expansion and war, and conflicts over race and slavery, as well as issues of religion, sexuality, and labor.

While Melville achieved popular and critical success with his first books based on his experiences as a sailor in the Pacific, his later work was received less favorably and he died in relative obscurity.  A renewed interest in his body of writing in the early twentieth century led to a “Melville revival” and popularity that continues today.  We will also consider this history of reception and criticism, particularly the way Melville is figured as a writer whose work speaks to later literary movements such as modernism as well as global historical conflicts such as the Cold War and the War on Terror.

Course requirements will include regular class participation, two short presentations based on assigned readings, a visit to Penn's Rare Book & Manuscript Library or other Philadelphia archive, and a final research paper.