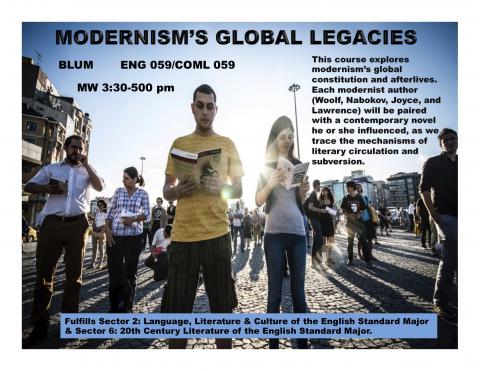 This course pairs modernist authors including Virginia Woolf, James Joyce, Samuel Beckett, and D.H. Lawrence, with contemporary novels, films, and graphic narratives they influenced, as we trace the mechanisms of literary circulation and subversion. After familiarizing ourselves with important theorists of the “transnational turn” in modernist studies, we will read key modernist narratives, themselves inherently transnational objects, alongside literary applications of these works around the world. Our final research project will consist in a collaborative tracing of the global reception history of Samuel Beckett’s Waiting for Godot, with each student focusing on a specific nation’s reception of Beckett’s text. Additional readings may include: Lady Chatterley’s Lover, Nervous Conditions, The Lonely Londoners, Mrs. Dalloway, Ulysses (excerpts), NW.