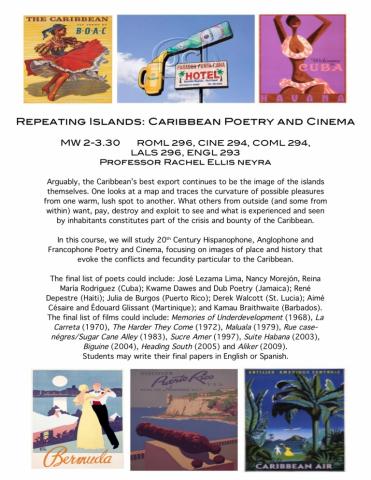 Arguably, the Caribbean’s best export continues to be the image of the islands themselves. One looks at a map and traces the curvature of possible pleasures from one warm, lush spot to another. What others from outside (and some from within) want, pay, destroy and exploit to see and what is experienced and seen by inhabitants is both the crisis and the bounty of the Caribbean – not just a blessing or curse, but something that invokes both. Throughout the 20 th century, Caribbean poets have worked within this crisis of the image, and Caribbean filmmakers have progressively joined the mimetic fray. What repeats from one island to another, and from poetic to cinematic form, is an intense concern about historic and contemporary representation.

In this course, we will study the crisis and the fecundity of the image in 20 th Century Hispanophone, Anglophone and Francophone Poetry and Film, and will approach the arc of the Antilles with different desires. The final list of poets could include: Luis Palés Matos, Julia de Burgos, José Lezama Lima, Nancy Morejón, Reina María Rodríguez, Kamau Braithwaite, Derek Walcott, Aimé Césaire, Édouard Glissant and Monchoachi. The final list of films could include: Memorias del subdesarrollo/Memories of Underdevelopment (1968), La Carreta (1970), The Harder They Come (1972), Maluala (1979), Rue case-négres/Sugar Cane Alley (1983), Sucre Amer (1997), Suite Habana (2003), Biguine (2004), Heading South (2005) and Aliker (2009). Literary themes and movements (poesía negra, negritude, modernism, poetics of maroonage, conversational poetics) will be discussed alongside political and social shifts of the region (decolonization, revolution, nationalism, diaspora, globalization, sex tourism). We will discuss the registers of poetry and cinema in the study of the forms (prosody/poetic devices and cinematic devices, respectively). Students are welcome to write their final papers in English or Spanish.