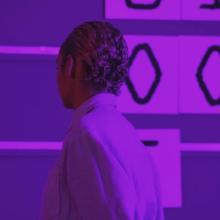 
In this session, Will Rawls will present some of his artworks—both performance and video—as points of departure for discussing choreography as an expanded practice. Choreography will be considered as a potent collider for movement and language, for sending the notion of the human being into question, and for practicing the self in real time. Along the way, Rawls will reflect on the stakes of image capture as it relates to Black performance and address the impact on his work of Caribbean intellectuals such as Édouard Glissant and Sylvia Wynter. Group discussion will follow.

Will Rawls is a New York-based choreographer, dancer, and writer with an approach that draws parallels between the elasticity of “form” and hybrid ideas of the self. His next work, [siccer] will premiere at The Kitchen in 2023. He has received fellowships and residencies from the Guggenheim, 2021 Alpert Award in the Arts, the Foundation for Contemporary Arts, United States Artists, the Rauschenberg Foundation, the MacDowell Colony, and several universities and museums. In 2020-2021, he held an appointment as the UC Regents Professor in UCLA's Department of World Arts and Cultures. In 2016, Rawls co-curated Lost and Found—six weeks of performances at Danspace Project that addressed the intergenerational impact of HIV/AIDS on dancers, women, and people of color. He lectures widely in academic and community contexts and his writing has been published by the Hammer Museum, MoMA, Museu de Arte de São Paolo, Dancing While Black Journal, and Artforum.